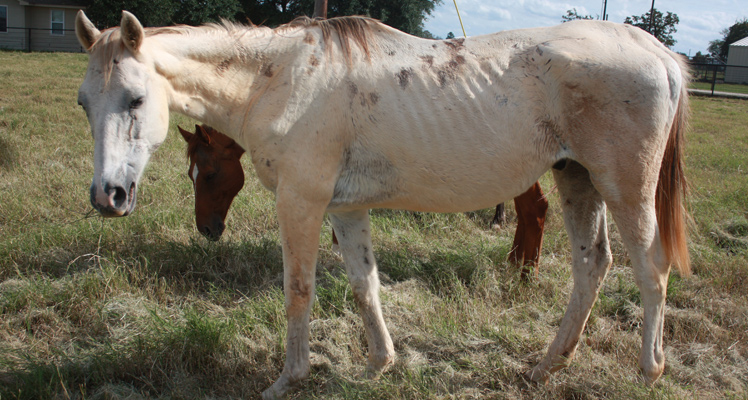 This is a story we found out about through Doris Days Equine Center and wanted to bring attention to Cleveland Amory Black Beauty Ranch. The story is heart-breaking like always when neglect is involved with animals but there is a happy ending Senator, one of the four horses that were rescued.

“In July of 2018, the Anderson County Humane Society in Texas conducted a wellness check on a farm that had allegations of neglect.  Authorities found 32 horses, many suffering from malnutrition and neglect.  There were also a number of deceased horses on the property.  The horses were placed in the temporary care of an affiliated agency until their health could be assessed and pending any charges.

By October the horses were ready for placement.  Many of the horses were still in need of additional care.  Four of those horses came to the Cleveland Amory Black Beauty, including Senator.

Upon arrival, Senator was still underweight.  His coat was in poor condition and he had many scars and scrapes that needed time to heal.  His personality was very withdrawn, and although sweet he was very suspicious of his caregivers.  It took several months to build his body and his trust.

Today, of the three thoroughbred horses from that rescue, Senator has made the most improvement. He’s physically changed for the best, but his personality has also come out!  It turns out that he’s such a character!

Senator has quite the puppy dog personality. He will follow you around for scratches or just to nuzzle you. He gets very confused when you shoo him away and will stand there and stare at you. Senator makes us laugh almost every morning because we need him to go in a pen and he just walks up and stands in front of you. We are all so proud of how far he’s come. He’s quickly become a favorite to us all.”

Summer is Coming to Carmel: Don’t Leave Your Dog In the Car

The Day Before the Race at Crossroads in Carmel