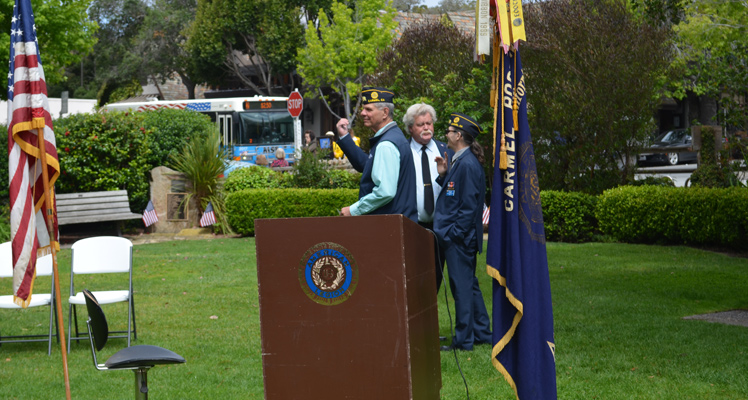 Davendorf Park had a nice celebration. With some cadets from the navy and some veterans who honored those that are fallen. Carmel Beach, crowds were down from last year’s Memorial Day may be due to the weather. The crowds were hopping downtown and the Hotels were busy. We went into Vesuvio Restaurant and asked if they’ve been busy and the woman working there said they did not have any reservations and normally people are home for BBQ’s and that by Monday the crowd is heading home. I had asked some folks what Memorial Day meant to them and then realized how many of us may not know the difference between Memorial Day and Veterans Day.

So what’s the difference?

Most people do not know the difference between Memorial Day and Veterans Day Celebrations. The two days are held six months apart: Veterans Day is celebrated every November 11, and Memorial Day takes place on the last Monday of May as part of a three-day weekend with parades.

Veterans Day was originally known as Armistice Day. It was first observed on November 11, 1919, the one-year anniversary of the end of World War I. Congress passed a resolution making it an annual observance in 1926. It became a national holiday in 1938. In 1954, President Dwight D. Eisenhower changed the name from Armistice Day to Veterans Day to recognize veterans of the two world wars. The intention is to celebrate all military veterans, living or dead, who have served the country, with an emphasis on thanking those in our lives who have spent time in uniform.

We also celebrate military veterans on Memorial Day, but the mood is more somber. The occasion is reserved for those who died while serving their country. The day was first observed in the wake of the Civil War, where local communities organized tributes around the gravesites of fallen soldiers. The observation was originally called Decoration Day because the graves were adorned with flowers. It was held May 30 because that date wasn’t the anniversary for any battle in particular and all soldiers could be honored. (The date was recognized by northern states, with southern states choosing different days.) After World War I, the day shifted from remembering the fallen in the Civil War to those who had perished in all of America’s conflicts. It gradually became known as Memorial Day and was declared a federal holiday and moved to the last Monday in May to organize a three-day weekend beginning in 1971.

The easiest way to think of the two holidays is to consider Veterans Day a time to shake the hand of a veteran who stood up for our freedoms. Memorial Day is a time to remember and honor those who are no longer around to receive your gratitude personally.

The Day Before the Race at Crossroads in Carmel