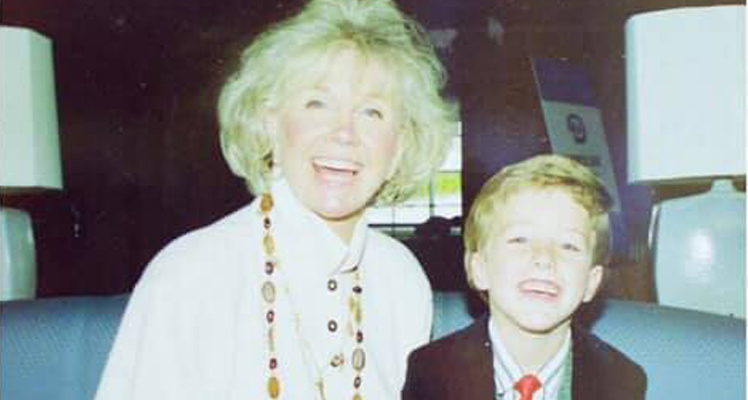 It was a sad day to hear the passing of Doris Day, however, it was even more sad news to hear the response of Ryan Melcher, the Grandson of Doris Day. I have to give a hand to Ryan for sharing his truth and being so vulnerable to tell all of us his side of the story. I think most of us were wondering how Ryan was feeling and personally, I was not surprised to hear his side of the story on his Facebook account. Many families have been stricken by this awful storyline and it doesn’t end well. Carmel Now is releasing Ryan’s response in hopes that anyone out there suffering from family issues will use this as a wake-up call to re-connect, communicate and tell those around them what they mean to them before it’s too late. Thank you, Ryan and we are all praying for you, many blessings.

It’s been an emotional 24 plus hours since learning of my grandmother’s passing. I want to first say thank you to all our extended family, friends, community members and fans from around the world that have reached out offering their condolences, support and sharing their favorite memories. Your words have meant more than I could ever adequately articulate.

A cultural icon, I’m proud of how my grandma built her career in television, film and as a recording artist. Later in life it was her work as a philanthropist and advocate for animal rights that connected her with so many people around the world, and that’s a powerful legacy to leave behind.

She encouraged my father Terry to explore music and it led to him to doing several albums on her as well as others with the Byrds, the Mama’s and the Papa’s and the Beach Boys. And although she was an incredibly private person, in my formative years she spent a lot of time and energy with our family, ensuring I felt loved. I would go to her home every day after school and those are memories I will always cherish. She instilled a drive and confidence that I will carry with me the rest of my life.

However, with so many stories reporting on her illustrious life and career, I wanted to share the following in the hopes that other families who have / or who are currently going through what we have will use this as a wake-up call to re-connect, communicate and tell those around them what they mean to them before it’s too late.

You see, I received the news of my grandmother’s passing like many of you — I awoke and read the news in a social media feed Monday morning.

Sadly, due to a divorce that I was thrown into the middle of while still an underaged child, I have not been allowed to see my grandmother for quite some time. When I was invited by Doris to dinner a few years ago after my father’s untimely death in November 2004 (melanoma), her new business manager, a former fan, intervened and asked me to meet him at the family owned Cypress Inn here in Carmel, California.

I was asked by this man: “Why do you want to see Doris?” I was shocked not only at the question, but also that it was coming from someone who was a stranger and outsider.

I just responded, “um….she is my grandmother!”

He replied, “I’m afraid you aren’t going to be able to see your grandmother,” citing the divorce between my parents as his excuse.

Looking back, I should have said more; should have drove to her home and not let a stranger come between us, but unfortunately the tall fences and 24-hour guard under her new business manager’s direction prevented me taking a stand and reconnecting with my family. She had been so happy to talk to me and we were both excited for our upcoming dinner together just a week before, and this man was clearly manipulating the situation.

All this to say: the dinner between my grandma and I never took place. Any and all communication was cut off from that point on and I was left bewildered. I later learned that the business manager had fired all the longstanding members on my grandma’s Foundation board and appointed his direct family as the new board members. It seemed I was not the only one who had been cut out.

I tried for some time after this to get the word out about what transpired, however ultimately decided against causing any new emotional waves for my grandmother, who by that time was late in age. Also, from what I had heard around the community from in-the-know people, her mind had already begun slipping so I feared my outreach would only cause more stress due to the new folks surrounding her. I could not bring myself to continue to fight an uphill battle at the expense of her wellbeing or my family’s.

I didn’t stand up for my family as I was young and still scarred; just a few years earlier while my father was very ill during the last years of his life, his wife blocked me from him, again using my involvement in my parent’s divorce as a tool to divide us. We later learned this woman had my father change his will, became executor of his estate and took control of our community property while preventing me from any contact with my own father. She attempted to have me arrested when I went to say goodbye to him on his deathbed. This has been a running theme in our family and a pattern I want to break.

When you’re young, you believe the adults when they say you are the problem, however no child —or adult for that matter — should be told who they can and can’t love. Especially family.

I will forever be grateful for the time I had with both my father and my grandmother. When I was younger our family was so close and I was so fortunate to have such special people raise me. It’s taught me to live in the moment and not leave things unsaid. It’s a hard truth, however it is my truth and one I hope others can learn from.

Flag Day commemorates the adoption of the flag of the United States, June 14