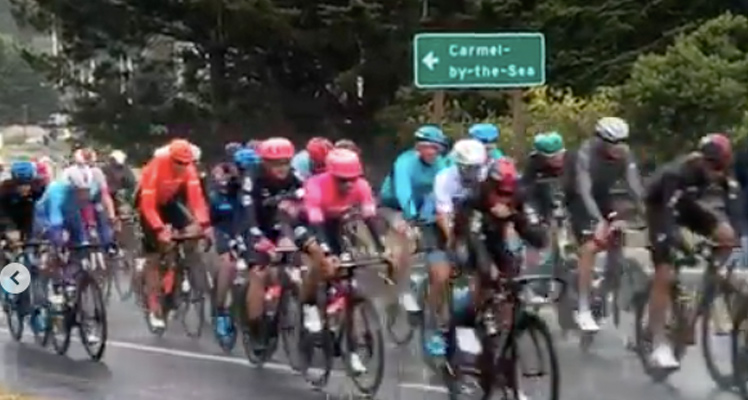 Yesterday the Amgen Tour of California passed through Carmel-by-the-Sea causing a traffic jam around 11:00 am on Highway 1 and Rio Crossroads. It was at a standstill for about 45 minutes as the cycling crew and riders rode through. Amgen Tour started May 12 and will end on 18th, they are in Stage 4 passing through Carmel. Throughout the week, cyclists will contest 773 miles of California’s most scenic highways, mountain roads and coastlines, visiting 13 cities throughout the state for stage starts and finishes, concluding in Pasadena on May 18.

Stage 4 of the 2019 Amgen Tour of California returns the pro peloton to arguably the most scenic stretch of road in the world. From its start at the WeatherTech Raceway Laguna Seca, the race embarks on a breathtaking 138-mile journey through California’s spectacular Big Sur coast to Morro Bay’s monolithic rock. This is a route that has also become synonymous with the Amgen Tour of California. The first three iterations of the race back in 2006-2008 included stages from Monterey/Seaside to San Luis Obispo. After a lengthy hiatus, the AmgenTOC again returned to this stretch of road in 2014 and then in 2016, the latter being a reverse of the me traditional north-south route. In May 2017, an immense landslide closed Coast Highway 25-miles north of Hearst Castle and only re-opened on July 18, 2018. Such a mammoth effort enabled the Amgen Tour of California to triumphantly return to this classic stretch of highway.

Big Sur Marathon: The Day of the Race